A minimum viable product (MVP) is a way to bring your product into the market quickly, without risking too much time or money on developing features that might be redundant. But building an MVP in its most commonly understood meaning (a working version of your mobile application) isn’t the only approach to validating your ideas and probing market demand.

Just like there are many factors to consider when creating the foundation for your digital product, there are many types of MVPs. Context, competition, offer, business model, business objectives, and many other elements determine the best types of MVPs for your project. That’s why there’s no single minimum viable product template that will be accurate for all mobile app projects.

One thing remains 100% sure, though: the necessity to validate your product ideas if you want to succeed. According to a Harvard professor, 65% of startups fail. And the reason for failure is simple — poor and untested product ideas. 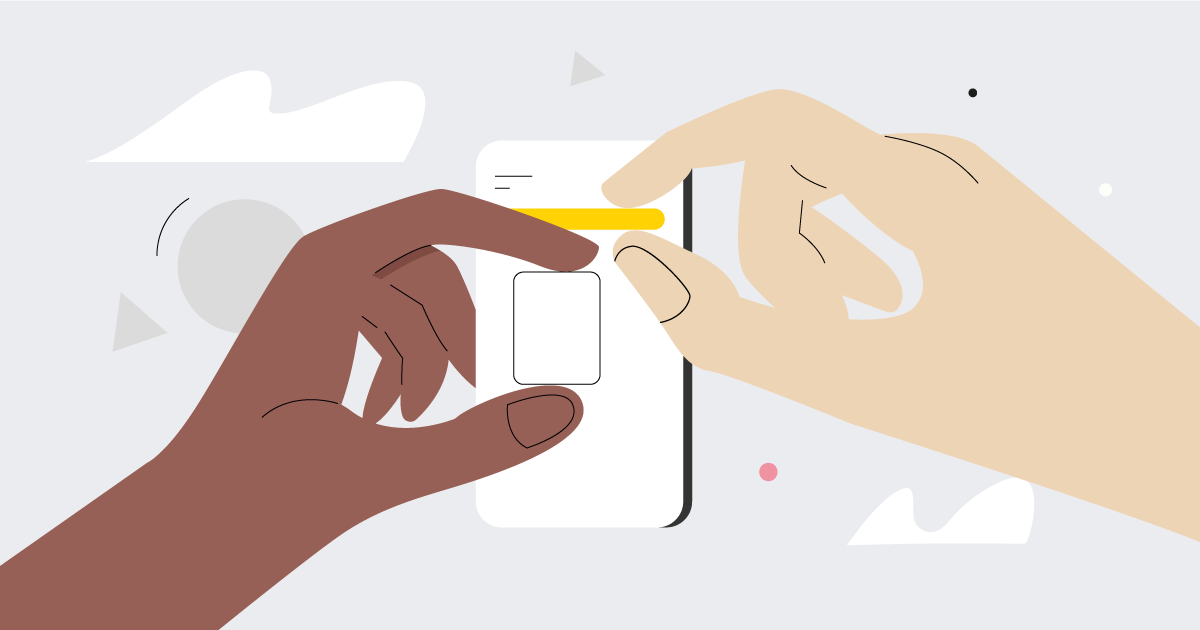 Maja Nowak
Digital Product Marketer
Article content
•
What Are the Different Types of MVPs?
•
•
•
•
•
How to Build a Minimum Viable Product That Is Immediately Valuable?
•
How to Boost Your Product’s Chances of Success in a Fiercely Competitive Market
•
How Do You Define an MVP’s Scope?
•
Collect Maximum Amount of Validated Learning with Minimum Effort
•
•
•
•
•
•
•
•
•
•

What Are the Different Types of MVPs?

Building a minimum viable product is the first step when launching any new project, but there are many different ways to approach an MVP.

Also known as the Flintstone MVP, a Wizard of Oz is a product that doesn’t yet exist but makes an illusion of being a completely functional product. Even though it seems complete on the outside — just like the Flintstone car — there actually isn’t any software present on the inside to do the work.

In fact, all work, e.g., in-app actions are done manually by a developer. Zappos, the online shoe retailer, was built with a Wizard of Oz strategy. In 1999, Nick Swinmurn, the founder of Zappos, searched for a pair of shoes but couldn’t find them in a nearby mall. He discovered that none of the major companies sold footwear online. Soon, he built a simple website and started taking pictures of shoes from stores all over and placing them on his website — no inventory system present whatsoever.

Yes, Nick Swinmurn was doing everything manually, which meant running to the store to fulfill an order that came through the website. Once the sales became significant, he knew it was the right time to invest more money, and that the business would take off.

A Wizard of Oz test can be time-consuming, but it's an excellent option for entrepreneurs looking to validate their product or service before investing large funds.

When Spotify founders were thinking about setting up their business, they noticed that other media streaming companies often went for expensive websites and apps, without really testing the viability of their products.

So instead of burning through all their funds on a fancy website or complex software development process prior to launch, they created an MVP in the form of a desktop application with music streaming as their core functionality to test the market need. However, their biggest focus was to bring down latency as much as possible, giving the experience no lag. The result? Spotify became the most significant music streaming company in the world.

So when creating a single-feature product, you need to understand that one functionality must work exceptionally well. After confirming that your product is viable, you can add more features as you learn the behaviors and preferences of your users.

The piecemeal MVP development framework relies on existing solutions to deliver a new service. For example, instead of building an entirely new content management system, you use solutions such as Wordpress. You don’t have to invest a lot of time and money to build a prototype or build a whole product from scratch in one go — you can assemble an MVP with existing tools.

This is exactly how Groupon was created, as an asset initially built on Wordpress. If the founders had insisted on building their own CMS first, the company might not have survived.

This approach allowed Groupon to quickly test the business idea with pet adopters, leveraging other software without spending too much money on expensive designs or complex functionality.

Concierge minimum viable product is similar to the Wizard of Oz test. With a concierge MVP, you also manually go through every step of the process with each customer. This gives you the opportunity to get feedback on your product or service and make any necessary adjustments to your product roadmap.

In the book Lean Startup by Eric Ries, Food on the Table is used as an excellent example of the concierge MVP. Food on the Table is an app that figures out what you like to eat based on the recipes you submit. The app then creates a shopping list using coupons to help users save money. To test out the idea, the founder personally collected coupons and compiled lists for each customer without any automation or a big team.

Hiring developers to build an MVP just so you can check if your idea will pick up on the market or inside your user base is justified only when you already have initial signs that there will be traction. While custom development gives you code ownership and flexible scalability options, the traditional approach takes time (roughly three months). Of course, you can use that time to put in the effort to build a following so that when your MVP is ready, there will be users signing up for it. But there's still a great deal of uncertainty whether your product will pick up or if you'll need to pivot or kill it.

You can use the above approaches such as concierge MVP to mitigate the risk of product failure, but these don't give your users a finished version of your product.

A quick and cost-effective way to try a product with your users is by building it using one of the no- or low-code tools. These tools let you import Figma designs and set up simple logic behind them so that you have a ready-made product available for release in less than two weeks. A no-code MVP gives you plenty of time to test how the product fares among your target audience, letting you introduce all the necessary feature changes to meet user needs as you discover them.

Want to quickly validate your product idea and learn as much as possible with minimum resources?
Contact us

How Do You Build a Minimum Viable Product That Is Immediately Valuable?

To determine whether an MVP concept solves a problem, and therefore is immediately valuable, test whether it does the job.

Jobs-to-be-done (JTBD) is a theory based on the premise that customers “hire” products or services as tools with which to complete tasks.

Even though an MVP can be very cheap, it’s not always free to make. Jobs-to-be-done is a powerful tool for measuring the potential of an idea before any investments whatsoever. It considers two things: what job customers would require your product to do and how well your new product satisfies unmet customer needs and pain points versus existing solutions.

A great example is Clay Christensen’s research for McDonald’s. During customer interviews, Christensen realized that people were “hiring” milkshakes because they're easy to consume with easy-to-dispose packaging and appetite-quenching qualities — perfect for those with time restrictions in the mornings. By understanding what was a milkshake’s job-to-be-done, Christensen’s team created a better milkshake, one that addressed the specific needs and wants of the customers.

Releasing services or products to a competitive target market is a tricky task. And while there are many approaches how you can still market the product effectively enough to succeed even in a crowded niche, there’s one that is particularly interesting from a psychological perspective.

One of the most famous mafia offers is Domino’s 30-minutes delivery guarantee. Upon launch, the 30-minute delivery deadline radically improved Domino’s market share and set the standard for all other pizza delivery chains. By making an offer potential customers couldn’t refuse — getting their pizza delivered in half an hour no matter — Domino’s grew to become the biggest pizza chain in the world.

Creating a mafia offer is not easy and requires careful consideration. You have to be able to deliver on the promise. If you're in the process of launching your first product, think about what's at stake. If your mafia offer turns out to be a dud, you risk losing not only time and money but also your chances to succeed. However, when executed correctly, you can capture your prospects early with an attractive offer and continue growing your business.

How Do You Define an MVP’s Scope?

Building a mobile application can be a time-consuming, challenging, and expensive endeavor. By creating a minimum viable product first, however, you can cut the time-to-market and expenses. The key to a good MVP is a clear scope at the start of the project. Project stakeholders should determine the scope by considering only the most crucial features that will help reach project goals.

A scope for a mobile app MVP can be as simple as a spreadsheet checklist with features where you apply the should-would-could approach. Mark every feature with an objective level of importance (with “should” features being the most important). The scope for an MVP should consist mainly of the “should” features, but it’s also useful to add a “could” or two to build your app’s uniqueness. Cross-check features with estimated development time to stay within budget and launch deadline.

Regardless of your approach, the scope for an MVP should always focus on maximum value with minimum loss of resources. Further iterations of your app, especially once usage data streams in, will help add other features, as per user feedback.

The goal of an MVP strategy should be to learn as much about your customers and their problems with the least amount of time, money, or resources spent. It’s tempting to build a fully functional app right off the bat when you have a great idea for software, but very few ideas deserve this type of investment upfront. Validate your ideas with different minimum viable product templates and types to enter the next development iterations fully equipped with information how to improve your product.

Stay up to date with news on business & technology
Thank you! Your submission has been received!
Oops! Something went wrong while submitting the form.
Build your MVP fast and safely ease it into the market
Let's talk
Mat Zaleski
Growth Manager