Node.js vs. Ruby on Rails — What to Choose for a Mobile App Backend

Choosing a tech stack for a mobile application backend is key to building a product with great performance. Ruby on Rails and Node.js are two popular mobile backend technologies that help developers build reliable and highly available apps. This article will explain the differences between them with example use cases for each. 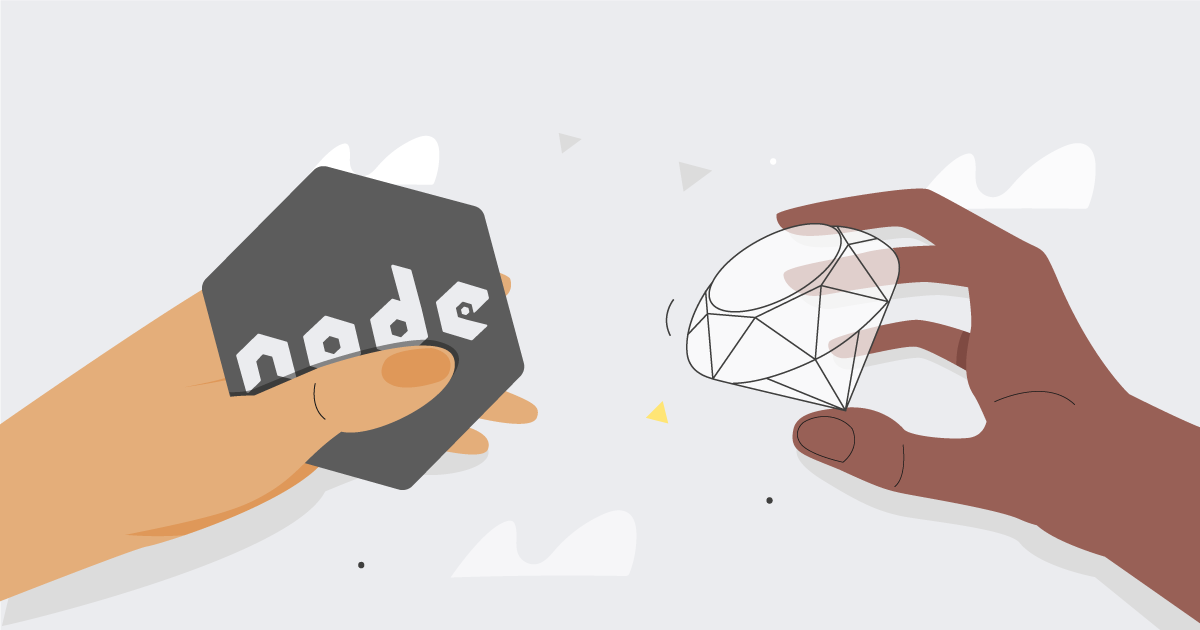 Node.js vs. Ruby on Rails for a Mobile Application Backend

What Is Ruby on Rails (RoR)?

Ruby on Rails is an open-source and server-side web application development framework based on Ruby and the Model View Controller (MVC) architecture. Ruby is famous as an easy-to-learn and beginner-friendly programming language.

Node.js is an open-source JavaScript runtime environment in the Chrome V8 engine. It uses an event-driven and non-blocking I/O model and is suitable for developing fast and scalable applications.

Node.js vs. Ruby on Rails

Is Node.js faster than Ruby?

One of the best features of Node.js is its speed. The single-threaded, asynchronous, and non-blocking execution of the Javascript V8 engine dramatically contributes to Node’s fast performance. Node.js can process a large number of simultaneous requests. Because of these inherent characteristics of Node.js, the technology uses a single processor core and memory efficiently.

Many companies are integrating Node.js into their mobile application backend stacks. The tech giant Paypal, for example, has doubled its requests per second compared to its Java application. Paypal also observed a 35% decrease in the average response time.

Ruby on Rails, or more specifically Ruby (the language that Rails is based on), is generally known as a slower technology than Node.js. There are many reasons behind Ruby’s shortcomings in performance.

LinkedIn has seen significant performance degradation with Rails on string manipulation and JSON translation. Upon migration to Node.js, the company has cut down servers from 30 to 3 and gained 20x faster performance for some scenarios.

However, this doesn’t mean Ruby on Rails isn’t worthy of being a backend technology. Ruby’s developers actively engage in addressing any performance issues. For example, the much-awaited Ruby 3 included many performance improvements like concurrency and MJIT. Besides, not every digital project needs the blazing fast speeds of Node.js. The key lies in the number of users to be served.

Scalability is a mobile app’s ability to effectively handle fluctuating user requests per minute. There are a lot of features in Node.js that support scalability. Its latest version has cluster module capability and supports microservices, which means breaking down the app into smaller components. This microservices architecture is then able to scale up and down based on the requirements. Furthermore, Node.js lets you load balance on multiple CPU cores, making the application on single servers scalable.

According to reports, Walmart has successfully transitioned its legacy system to microservices with Node.js as the backend technology. The company has seen a 98% growth in mobile conversion.

RoR supports scalability by optimizing application infrastructure and performance — in other words, you need to increase more resources to get the effect of scalability. Still, several leading tech companies with large user bases like Airbnb, GitHub, and Shopify have RoR in their tech stacks.

The asynchronous and event-driven concepts of the technology may be challenging for novice developers to learn. However, Node.js uses JavaScript which is the most popular language in the world according to the Stack Overflow Survey 2021.

With Node.js, developers can build the frontend and the backend of a mobile application using the same language (e.g., with React Native on the front and Node.js on the back). The large number of frameworks, third-party libraries (thanks to the huge repository of npm), and learning resources help developers build mobile applications fast.

For example, there’s TypeScript — a programming language developed by Microsoft to facilitate the development of large applications in Node.js, React, or React Native.

RoR has been designed explicitly for fast prototyping and application development. It has an Object Relational Mapping (ORM) system that you can use to map business logic and the data layer together to develop and deploy a complete and working prototype quickly.

Ruby language itself is very concise and easy to write. Furthermore,  you can create a complex application using only a few commands with comprehensive modules, scripts, and a package management system. In addition, there are several third-party libraries or Ruby gems that enable faster development.

Several community forums are available for Node.js mobile app development, such as Github, Stack Overflow, and Reddit. In the 2021 developer survey by Stack Overflow, Node.js scored among the top technologies. Also, many leading tech companies like Facebook and Google have contributed to the Node.js development, making it a reliable and trusted open-source technology.

RoR also has a vibrant community of innovative developers. Several community forums are available for Rails mobile app development, such as Github, Slack, and Gitter. Rails developers are actively engaged in the improvement of the existing functionalities and new feature development. They frequently update the source code, fix bugs, and address security vulnerabilities. With Rails, it’s relatively easy to find the exact piece of code (or gem) you want to incorporate into your application.

The Ruby community is heavily involved in testing and test automation. Testing is inherent in Ruby on Rails, making it easier for developers to test the code as they develop the backend. Since Ruby is based on the MVC architecture, it can automatically produce skeleton test code while developing the coon. There are many testing frameworks for RoR, e.g., Rspec, Minitest, or Cucumber.

Which One Is Better, Ruby on Rails or Node.js?

Both of these technologies have their pros and cons in each area we discussed. In community and testing support, both Node.js and RoR are relatively equal. In contrast, in terms of speed and scalability, Node.js outperforms RoR.

Aside from that, there are disadvantages of Node.js that you should keep in mind when choosing the right backend technology for your application.

What Is the Best Backend for a Mobile Application, Then?

Mobile application backend highly depends on the purpose of the mobile application itself and the short- and long-term business goals. That said, Node.js and RoR are among the leading backend technologies for Android and iOS application development.

The key to picking the best one lies in the skills of the developers who write the backend in a specific language or technology. Inexperienced developers can make poor quality mobile app backends even in top solutions.

With Node.js, you can create highly scalable apps that allow processing multiple concurrent requests from the users. At nomtek, we build high-performing mobile applications that run on the following stack:

Here are the application types where you can use Node.js as the backend:

Mobile applications with Ruby on Rails on the backend

Ruby on Rails is great for fast prototyping — with a large number of Ruby gems available, developers can implement many features right off the bat.

Here are the use cases where you can rely on RoR as the backend for your mobile application:

Node.js vs. Ruby on Rails as a Backend Technology

Node.js and RoR both have their pros and cons. Node.js might be a better choice for processing multiple requests and long-term scalability needs, but without CPU-intensive tasks. On the other hand, Ruby on Rails has extensive support from its community. Plus, it’s easier to write, build, and deploy applications with it. Many renowned companies have either RoR or Node.js (or even both) technologies in their tech stacks.

As always, the answer which technology is a better choice for your project lies in your application’s context and business goals.

Stay up to date with news on business & technology
Thank you! Your submission has been received!
Oops! Something went wrong while submitting the form.
A solid backend ensures great mobile app performance. We have senior Node.js and Ruby on Rails developers
Contact us