Android App Development: How to Build a Great Mobile Product

All right, so how come such a shattering number of apps fails?

That’s easy — because they don’t solve anything for their target audience. Indeed, it’s the failure to research the market that’s the top reason why mobile applications flop on app stores.

Whether we’re talking about iOS or Android app development, the principle is the same:

Do your research and battle test your app idea with potential users. Only then will you be able to use the application as a vehicle for business growth.

In this article, I’ll take you through the basic steps you need to take to make your Android development project successful. 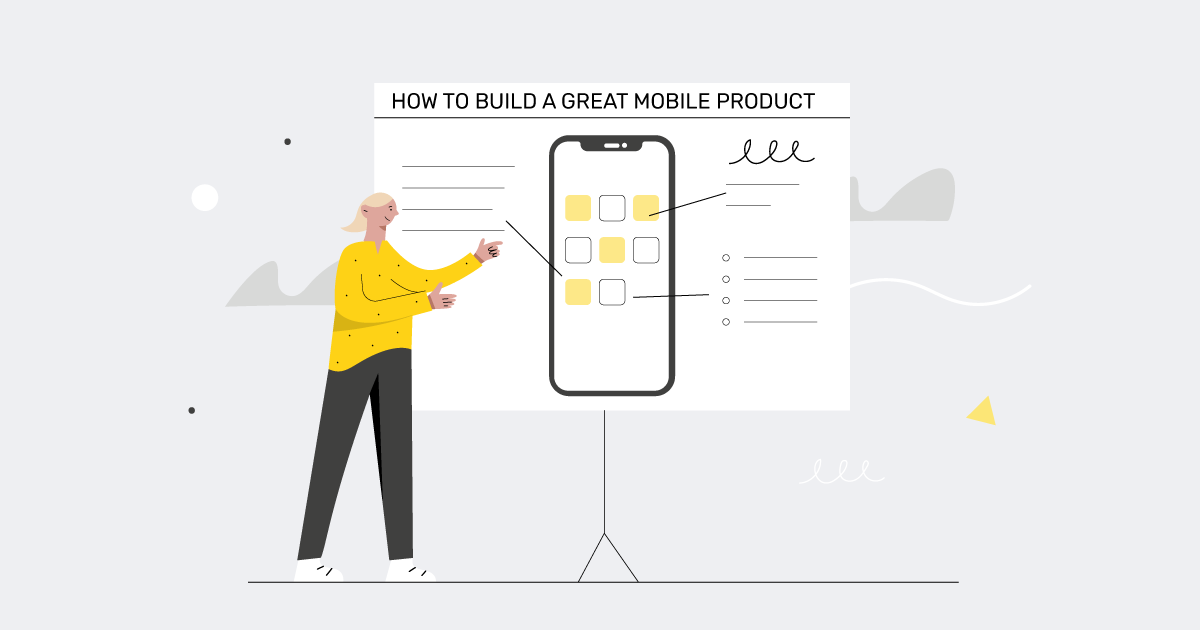 How to Build a Great Mobile Product

Start with an In-Depth Idea Validation and Analysis

A business analysis of your idea is the most important part of the app creation process.

I can’t stress this enough but validating your idea before investing money in its creation will help you approach the process with the necessary level of confidence backed by data.

Here, you have to consider concepts such as:

A key phase during idea validation is a detailed analysis of your competitors.

Looking at how your competitors solve for their audiences will help you build a better strategy for your product — you’ll know what worked for them and what has drawn negative feedback.

Similarly important is determining if your product is lucrative. To do this, think about how your competitor’s growth looks like. Have they developed a sizable customer base? Are they out looking for specialists to expand their business even more?

In essence, you validate your idea to learn if the product will pick up on the market and give you sustainable growth opportunities.

Use tools such as lean canvas for a deeper dive into your product analysis.

Be it an internal application for employees, a customer-facing app, or a game, the design is important across all app types. Positive user experience comes from both how the app looks like and how it works.

That said, when creating designs, make sure the designer understands the project and knows your target audience. The colors, typography, pictures, animations — all have to be aligned to reflect the needs and preferences of your users.

If you’re releasing your app into a highly competitive market with many similar apps, the design of the interface can make or break a deal.

For example, users might love the functionalities offered by your competitor. But if that product has a poor interface and usability, consumers would just as well leave the application in search for a better solution.

To be a viable alternative, however, your product needs seamless UI and UX.

So, regardless of application type, keep your design smart, intuitive, and clean. A cluttered interface is a sure-fire way to make your users wrinkle their noses.

Choose the Right Technology for Development

The right technology stack for your Android application is essential to equip your product with desired functionalities and ensure easy maintenance and support.

Mobile apps can be built using a variety of tools, technologies, and programming languages.

Here’s the rundown of the basics to help you navigate the world of Android app development.

What language is used in Android app development?

Once the gold standard in native Android development, Java is a well-known programming language with a vast library of tools. It’s an established and reliable language that’s been in use for over 25 years.

Interestingly, Kotlin was built to address Java’s shortcomings when it comes to Android API and developing Android apps.

What software do I need to build an app?

For native Android applications, you need an IDE, Android SDK, plugins, and libraries.

IDE — an application can be written in the good ol’ notepad, but using an integrated development environment (IDE) speeds up the whole process. An IDE has many tools that streamline application development. Android Studio is the most popular IDE.

Android SDK — contains documentation, frameworks, libraries, and debuggers that are necessary for development.

Plugins and libraries — these are used to automate multiple tasks and expand or customize the development environment.

This tech stack is used in native Android applications. But your options don’t end here.

Depending on your goal and your target audience, you can consider cross-platform app development to create an application for iOS and Android using a single codebase.

Cross-platform app development for iOS and Android is useful when your target users are scattered over the two operating systems. Delivering your product for the two platforms significantly improves your reach.

With cross-platform, your product uses a single codebase that you can reuse to create the app for iOS and Android (with their specific design modifications to maintain user familiarity).

Code reuse in cross-platform development helps you decrease time-to-market. You can reuse up to 90% of code across iOS and Android. Plus, the business logic of the app can also be reused for a desktop version of your product.

Currently, there’s a plethora of tools and frameworks for cross-platform development, so we’ll list out the two most popular ones.

Bonus: Developers can also look to Kotlin Multiplatform Mobile to develop the business logic and share the codebase between iOS and Android. It’s a relatively new solution, but one that’s quickly gaining ground among developers.

What language is used for the backend of a mobile application?

You can write the backend of a cross-platform application in Node.js, Ruby on Rails, or Python as well as Java or Kotlin. The backend runs remotely on a server instead of a user’s phone, so it can be written in whatever language serves the app’s purpose best.

Consulting with an agency that provides Android app development services will help you determine the most effective technology stack for your mobile app.

Why Develop an Android App?

There are many reasons why you should consider building an Android mobile app. Let’s go over some of them.

Google provides a comprehensive set of tools for building the internet of things (IoT) connected devices. With Android apps in TVs, cars, and wearables, you can easily build a whole interconnected ecosystem.

Google Play isn’t as rigorous in its submission guidelines as the App Store. Your app can enter the market faster than on iOS, where apps undergo in-depth evaluation. It’s not unusual to have your application appear in the Google Play store on the same day of being submitted.

Easier submission to Google Play is especially beneficial when creating proof of concepts or prototypes to check the market demand before full-fledged development.

The App Store is known for stricter review guidelines. This means your application can be rejected due to bugs, security issues, or performance. What you end up with is a longer time-to-market caused by fixes.

Globally, Android owns 84.8% of market share against 15.2% claimed by iOS. In the US, however, the situation is more evened out, with iOS holding almost 60% of market share. Similarly, iOS reigns the market in Japan and the UK.

To put it in perspective, there are roughly 3.5 billion smartphone users globally. And while not all fit your ideal target audience profile, Android’s dominant market share still means your product can reach a greater number of consumers if you release the application on that operating system first.

That said, an Android app is almost a necessity for most businesses. Of course, whether your company actually needs an Android app largely depends on your business model. That’s why a thorough idea validation and product strategy are critical elements of every digital product’s life cycle.

Why are Android devices so popular?

The variety of devices across all price ranges is the reason why Android app development is so popular. Consumers in developed and developing countries can easily buy an Android phone. Apple’s mobile phones aren’t this affordable.

There are also many Google Play store alternatives, which gives users access to a larger pool of applications.

What to Keep in Mind during Android Application Development?

Android’s vast fragmentation might also make it difficult to introduce new features to all users at the same time.

What does that mean?

Support for many phones and system versions equals longer time-to-market — differences between each release can be substantial and call for targeted development.

Because of that, application testing should be the foundation of your product — when you release an app that’s supposed to support many phones and system versions, you have to ensure it works the same everywhere with every update.

Consider this, there are many, many new phones released every year, rocking different screen sizes and hardware.

And then you’ve got all those foldable phones like Samsung Galaxy Fold or other rollable phones showcased at CES 2021. That said, mobile app layouts can be estimated but rarely defined specifically. Tests will help you check if your app runs well on all screen sizes.

Android apps rule in the number of downloads. But the difference in spending among iOS and Android users is staggering.

In 2020 alone, mobile consumer spending hit an estimated $106 billion, with iOS snagging $69 billion of that amount, according to a SensorTower report.

Whether that’s because there are more paid apps on iOS and more free apps on Android hardly matters. The fact is that, statistically, releasing an app on iOS can bring you more revenue.

These numbers don't mean you should eschew releasing your application on Android. Quite the contrary, it only suggests that going for Android and iOS both can be a good approach.

Cross-platform development will let your product enter both markets at a lower cost compared to building two native apps for each platform.

But keep in mind that complex applications — ones that rely on a lot of hardware or system functionalities — need bridges to leverage platform-specific features. For that to happen, developers need to write bridges natively.

Of course, when you’re on a tight budget, develop an MVP for only one platform and see how it goes from there. In that case, start with the mobile platform that’s preferred by your target audience.

Another upside of native Android apps is the low publication cost. To publish an app on Android, a Google developer has to pay a one-time fee of $25. There are no extra fees charged, but Google takes 30% of the revenue that paid apps generate.

In contrast, an Apple developer account costs $99 annually ($299 for an enterprise account). The company also takes a 30% commission from subscriptions and in-app purchases.

A mobile app is a great way to increase your revenue source and pursue different business models. Both native Android and cross-platform are viable options and where the choice boils down to your current business needs and future projections.

A native Android application will give you excellent performance and full access to advanced functionalities.

Cross-platform mobile application development is the answer to releasing a product for iOS and Android while keeping the cost relatively low (compared to building natively for each platform).

Stay up to date with news on business & technology
Thank you! Your submission has been received!
Oops! Something went wrong while submitting the form.
Work with an experienced partner with a portfolio of successful releases
Contact us