How Businesses Use Augmented Reality: App Examples across Industries

With relatively cheap implementation costs and easy accessibility, mobile AR is a great choice for a goal-oriented tech asset. Businesses can use augmented reality to increase customer engagement, improve brand promotion and awareness, and facilitate the creation of product demos.

Multiple high-profile companies are investing in AR tech. Among them are Qualcomm, Apple, Facebook, and Google.

Both Apple and Google are heavily developing their respective AR software development kits (SDK). ARInsider projects that by the end of 2020, there will be over 2.5 million AR-compatible mobile devices out there compared to only 500 million active users. There’s a huge potential for commercial adoption of this tech.

Update October 2021: As of 2021, there are roughly 2 billion AR-enabled devices, with 851 million Android smartphones and 1.25 billion iOS phones.

In fact, IDC’s Worldwide Augmented and Virtual Reality Spending Guide predicts that global spending on cross-reality tech will experience an exponential growth of 77% CAGR between the years 2019 and 2023.

The AR market alone is blooming, with various forecasts projecting it to reach between 30 to 80 billion USD in the upcoming years (1, 2, 3).

No mainstream implementation of costly technology necessary to bring it to the users makes augmented reality that much more accessible. On the other hand, virtual reality or mixed reality headsets are still too expensive for such widespread adoption.

But what is all the fuss about? Can AR apps transform businesses and add tangible value? Check out how augmented reality is helping businesses. 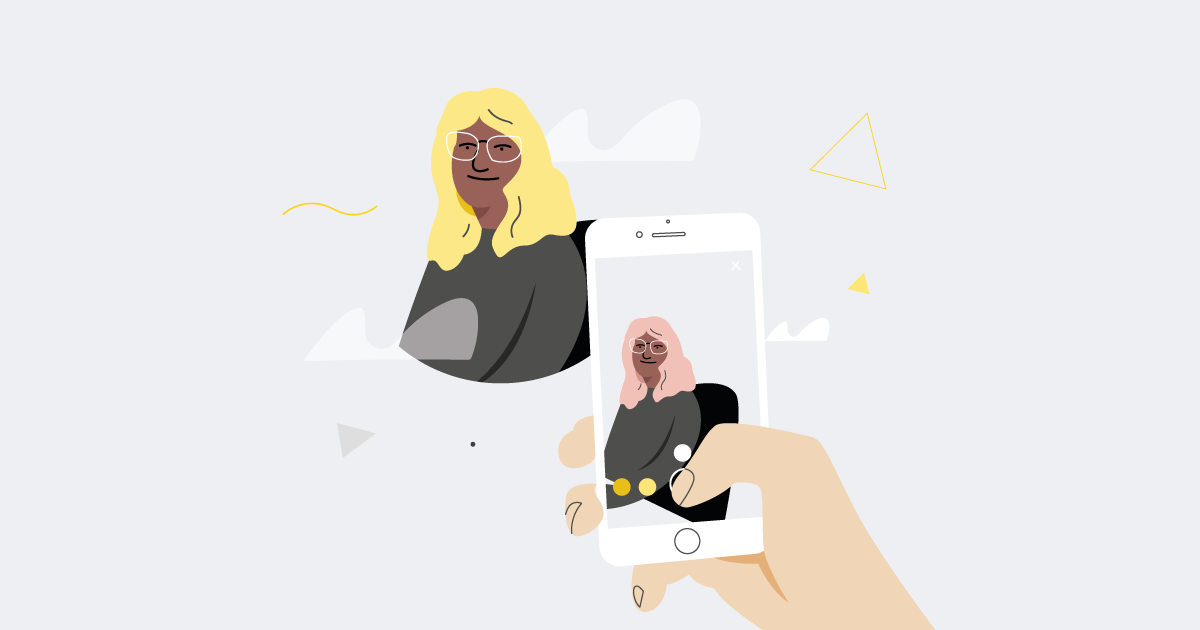 How Businesses Use Augmented Reality

Houzz enhances its selling and reach capabilities with AR, to help customers better visualize how a product would look like in their house. A growing selection of products available for an AR viewing helps Houzz fuel sales and increase engagement.

The 3D view features tiles, furniture, lighting, and other accessories. Houzz’s CEO Adi Tatarko said that users who used the My Room 3D tool were 11 times more likely to make a purchase.

Once you’ve set up AR capability inside an ecommerce app, creating and adding 3D models of products is a relatively inexpensive way to bring AR to your customers.

Great-looking shoes don’t always look equally great on feet. Wanna Kicks gives its customers a chance to try how a pair of sneakers would look on their feet before making a purchase.

There’s still a huge opportunity in retail AR that will most likely be explored in the upcoming years. For example, customers could create a 3D image of their body to be used across shops for better fitting experiences. And I’m not talking here about a simple superimposition of an image of a shirt onto the picture of your body. A 3D scan would reflect how the material flows on different body shapes.

Show your product in your customer's environment. Let them interact with it
Contact us

Now that’s a piece of app that I absolutely love. When I first downloaded Google Lens, I had this nagging urge to g-lense everything around me. And even if not all the stuff I g-lensed was properly identified (for some reason, my sleeping cat’s paw got tagged as a rat), Google Lens has proved to be really useful in real-life situations where you need to translate or identify something.

But that’s just one side of Google Lens. The app can also be used as a powerful marketing tool. For example, by scanning a product, customers can check product reviews, product information, or price comparison. Brands can offer coupons or promos hidden inside ads. The key is to provide plenty of info that can be delivered to your customers via Google Lens.

Moreover, ads can be further explored and give a greater background when a user simply scans a billboard, no QR codes involved.

This take on AR is a great way to stay connected with fans and keep them consuming more content and sharing it with the world.

UPS makes it easier for its customers to measure their packages with the in-app measurement tool that automatically inputs package dimensions after scanning.

Edmunds is an excellent example of the use of AR to facilitate purchases for customers. Edmunds uses AR to help customers determine if a car they’re interested in will fit into their garage.

Customers scan their garage space and the app will render a 3D model of a car the customer is interested in inside the garage with information whether it fits or not.

Eco Structures is a company that builds cost-effective accommodation suitable for a variety of uses. The company launched its mobile app with AR functionality to help its clients visualize how the tent-like structures would look like in their space.

JigSpace is a great app for everyone curious how stuff works. Users can explore available “Jigs” or create their own.

What started as an education app, however, has now evolved into a comprehensive tool that can be used by businesses for training, prototyping, and demos.

Multiple export options, floor plan views, and whole floor scan are just some of the features RoomScan LiDAR offers its users. It’s a great tool for architects who want to quickly draw floor plans or for homeowners.

How many times have you been in a situation where you had to measure something fast but had no tools to do it? Well, to the rescue in such situations come AR-based measuring apps such as AR Ruler App.

While there are still inaccuracies present in the app, with the introduction of iPhone 12 Pro — that features Apple’s LiDAR Scanner — we can expect this family of apps to offer significantly better measurement accuracy.

SunSeeker is another tool valued by various professionals. From architects and homeowners to realtors and gardeners, SunSeeker gives users detailed information on how the sun operates in a given location.

Check out how we helped Lighticians design and develop a mobile app for controlling light fixtures.

Amazon’s newest app is another take on augmented reality by Amazon. The company already has a Room Decorator feature in Amazon Shopping, where customers can visualize multiple products in their spaces.

Wella’s Smart Mirror lets customers see how they would look with different hair colors. Equipped with face-recognition capabilities, Smart Mirror can be used to further personalize customer experiences by reviewing past looks.

Many companies have already implemented AR into the customer journey, letting consumers experience products before committing financially. The widespread adoption of AR by businesses can accelerate the transition to a new dimension of online shopping. And since the COVID-19 pandemic has accelerated the transition to online retail by five years, AR-supported sales can be a key differentiator.

Featured articles
No items found.
Stay up to date with news on business & technology
Thank you! Your submission has been received!
Oops! Something went wrong while submitting the form.
Interested how AR could help your business? Contact us and let’s have a conversation.
Sure, let's talk

Maja oversees content production at nomtek. Restlessly creative, she has over nine years of experience as a content writer. Maja loves cats, long-distance running, and orbiting the Earth during meditation sessions.