What Is Augmented Reality? Your Guide to Immersive Technologies

We’re slowly entering the era of augmented reality dominance. With prices for AR hardware dropping and tech giants announcing the release of their AR devices in 2021–2022, mainstream AR adoption is just a matter of time.

But it’s no longer a far-flung future.

Dive deeper into the world of augmented reality in our guide to immersive tech. 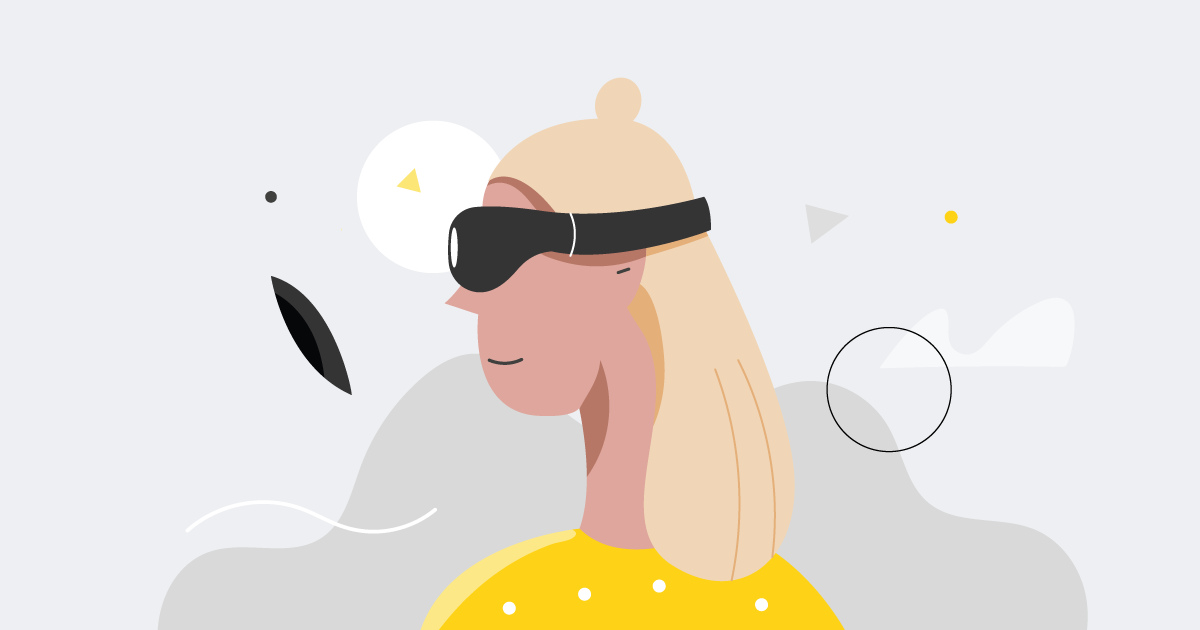 Learn What Is Augmented Reality (AR)

With all the technology that goes into an AR experience, the definition of augmented reality is pretty straightforward.

Augmented reality (AR) is a computer-enhanced version of the physical world, with digital content used to amplify the user experience of reality.

Digital content in AR can range from simple graphics and animations to videos and GPS overlays. The rendered content can “feel” and respond to the user’s environment and the user can also manipulate the content (via gestures or movement, for example).

In 1838, Charles Wheatstone invented the stereoscope, the first attempt to render three-dimensional objects.

Fun-fact: Google Cardboard’s design is based on the stereoscope.

In 1957, Morton Heiling invented Sensorama. Although very crude compared to today’s AR technology (and not controlled by a computer), Sensorama offered viewers a blend of sounds, visuals, motion stimuli, and smells.

Heiling also invented and patented the Telesphere Mask in 1960, which is hailed as the first head-mounted display.

Ivan Sutherland invented another early version of a head-mounted display. The device, which looked more like a sophisticated torture device than tech innovation, paved the way for other cross-reality solutions.

Louis Rosenberg developed Virtual Fixtures — the first immersive AR system built at the United States Air Force Research Laboratory. Virtual Fixtures injected digital content into the real world, but the experience was unlike what we associate with AR today.

The image the user saw was an optical illusion, not a 3D rendering.

Virtual Fixtures was also an example of telerobotics — the user was connected to a robot via an exoskeleton that controlled the robot’s movements.

While Google Glass didn’t revolutionize the world of AR, it was a big step forward into decreasing the size of immersive tech devices.

Even if you hate Pokemons, this mobile augmented reality game has a solid place in the history of AR.

You can consider this year as the full-fledged introduction of mobile AR into the mainstream.

The AR technology is pushing the boundaries of what’s possible to achieve. Multiple tech giants are working on their AR devices.

Many companies across industries begin to recognize the potential in AR to improve workflows and processes.

With Elon Musk’s Neuralink eagerly exploring the brain-computer interface, in a few years we might see implantable chips that project augmented reality content directly into our brain.

The direct stimulation of the visual cortex paired with external sensors and computing units would allow us to “see” more of the world around — the digital and physical content would blend in a mind-bending immersion.

All right, so you know that augmented reality adds or expands the real world with digital content.

But depending on the type of augmented reality and the device used for AR rendering, different tech is involved.

What Devices Use Augmented Reality?

Here are some examples of AR devices:

As you can see, that’s somewhat of a crowd.

Now check out what needs to be used in augmented reality programming to render AR experiences. The below are just some of the tech available for AR development:

What Hardware Is Used for Augmented Reality?

What Software Is Used for Augmented Reality?

How Does Augmented Reality Work on Mobile?

Let’s say you want to see an AR alligator in your room. You can view it via Google Chrome on your Android phone. Just type “alligator” in the search bar, and hit View in 3D.

Step 1. The cameras and sensors in your phone will probe your room. Using tech solutions such as depth-tracking and SLAM (simultaneous localization and mapping), the phone maps your environment.

Step 2. Processors and computing units analyze the data and calculate how the alligator is to be placed respective to your environment.

Processing units are similar to those found in computers, i.e., they include a graphics processor (GPU), central processor (CPU), RAM, and flash memory. That hardware calculates angles, orientation, direction, and speed.

Step 3. The display — in this case your phone screen — renders the image of the alligator.

You can view the alligator from all angles — processes from all three steps repeat with every frame to render an accurate 3D model.

The processing happens in milliseconds, which our brains are incapable of discerning — hence why we don’t see any delays in the rendering. On average, phones view 30 frames per second. Yup, that’s how quickly AR computes.

List of phones that support ARKit (iOS AR) scroll down to the bottom of the page.

For the sake of simplification, we can divide augmented reality into two types: marker-based and markerless. Both can be further subdivided.

The alligator AR experience from above is an example of markerless AR.

With these two briefly explained, we can now branch off into other subtypes of augmented reality.

Location-based augmented reality uses GPS to match the digital content to the user’s real-world environment. As the user walks around the real world, the content appears based on predefined GPS markers and is rendered to fit into the real world.

Projection-based augmented reality is a large-scale solution, where the rendered images are projected on a surface, without the need for the user to wear any special gear.

As the name suggests, superimposition-based AR replaces the real-world view of an object with digital content.

In recent years, we’ve been pelted by multiple terms used for cross-reality technologies.

We have augmented reality, virtual reality, mixed reality, and many immersive realities in between.

All these subsets fall under extended reality (XR) — an umbrella term for all solutions where the real world blends with virtual elements.

You can think of extended reality as a spectrum.

On the one end of the spectrum, you have the real world.

On the other end, there’s virtual reality — i.e., where the real world is entirely replaced with a virtual rendering.

In between the two, you have different flavors of augmented reality — i.e., technologies where the real world is enhanced with digital content.

What Is Virtual Reality (VR)?

Virtual reality plunges the user into an entirely projected environment — in other words, the view of the real world is replaced with computer-generated content.

With all the theory checked off, let’s check out some of the most exciting augmented reality apps out there.

Mondly also features augmented reality lessons where you can view animals and objects in your space for deeper engagement and better experience.

Now this is a hugely entertaining AR mobile app that rubs my imagination in the right way.

Anyone a fan of Stranger Things, here? The 80’s AR Portal gives you a chance to immerse yourself in a fun experience and feel the crazy retro-cosmic spirit of the 80s. It’s definitely not a perfect app, but the concept is alluring.

ARLOOPA is an educational app with a flair for entertainment. With the app, you can view multiple AR models in your space and engage with them.

Interestingly, the app has three different types of AR available for you to experience: marker-based, markerless, and geo-location.

The Human Anatomy Atlas 2021 is one of the best augmented reality examples out there. Excellent for medical students and health enthusiasts, the app features some of the most detailed human anatomy models, with tissues, muscles, bones, and nerves. All supported by interactive lectures.

And you can view all those fancy body parts in AR.

Bringing immersive technologies into the healthcare industry can help doctors explain complex procedures to patients and serve as an excellent reference during reconstructive surgeries.

We talked in detail about augmented reality in healthcare in one of our articles.

No respected AR app list can go without the IKEA home decor app.

For home decor, there’s also the amazing Houzz app, which got the Editor's Choice award on the app store.

Shapr3D is an award-winning app for 3D modeling workflows. It’s a professional CAD (computer-aided design) tool with robust capabilities. A work-horse for designers.

With the expansion of the app to macOS, the Shapr3D iPad users can now collaborate on prototypes across devices.

In 2020, Shapr3D got Apple’s Design Award (the first CAD application to get it).

The improved depth-mapping properties of LiDAR technology result in more accurate models (the developer claims a 5x increase in accuracy compared to the non-lidar app version).

Wondering what is AR used for aside from games, lifestyle applications, and entertainment?

Companies can use AR as a catalyst for process and workflow improvement across a variety of industries.

We wrote extensively about different use cases for augmented reality in our article.

Augmented reality is an innovative and effective tool to enhance several areas in businesses of all kinds.

Future-thinking companies are eagerly implementing augmented reality in their projects and business operations.

While the idea of augmented reality and the opportunities it brings are alluring, this technology doesn’t come without issues. Specifically, privacy and security issues.

As AR devices and software evolve and become increasingly mainstream, topics such as ethics and legality begin to pop up during conversations regarding augmented reality.

The most important questions are:

The thing is, AR relies on a number of sensors and cameras. Many devices, such as HoloLens 2 or Magic Leap, additionally track eye movement — in essence, they know what you’re looking at.

From a purely marketing standpoint, who wouldn’t want to know all the minuscule details that make our decisions?

However, not all is lost, and companies digging into the field of AR are trying to first figure out all the implications of this nature before actually releasing their devices into the market.

For example, Facebook has created Project Aria — a whole department strictly for analyzing privacy and ethical implications of the future AR glasses made by the company.

Since AR devices are in essence connected devices, just like IoT, they rely on the same connectivity protocols. As a result, this also generates the more “traditional” security concerns:

Any AR-enabled assets have to be included in risk assessments and audited regularly to ensure access to sensitive data is protected.

Even though the adoption of AR applications hasn’t yet gained significant traction — still, 26% of US adults have used AR — the sophistication of devices and the drop in price for hardware can soon increase the pace of adoption.

Various sources predict the global AR market to reach billions of dollars in upcoming years. As use cases of AR expand, spreading across industries and sectors, AR-enabled devices emerge as must-have tools for experiencing new modes of entertainment and exploring new ways to collaborate and work.

Tech giants are in an arms race toward developing increasingly advanced AR devices that bring this technology closer to users, at an affordable price. 2021 and beyond will be pivoting in the realm of augmented reality, with Facebook, Apple, Microsoft, Google, Nvidia, Vuzix, and many more pioneering the AR technology.

The key to conquer the market early will be affordability, accessibility, convenience, and immersiveness. With that ticked off, augmented reality applications on mobile devices will become an invaluable extension of reality, paving the way for other AR devices.

Stay up to date with news on business & technology
Thank you! Your submission has been received!
Oops! Something went wrong while submitting the form.
Innovate and engage your customers with augmented reality
Let's talk